The Story of the Norwegian Lady

The Norwegian Lady stands on the boardwalk overlooking the Atlantic Ocean in Virginia Beach, VA, and her twin sister stands on the beach in Moss, Norway as a memorial of a tragic shipwreck in the year 1891, and at the same time as a symbol of the friendship between the two sister cities.

WRECK OF THE  “DICTATOR”

The bark Dictator, registered in Moss, in March 1891 was on the way from Pensacola, Florida, to England with a cargo of lumber. Her master, Captain Jørgensen, had a crew of 14 aboard, and also his wife and their four-year-old son.
Rounding the south coast of Florida the Dictator ran into a storm which increased to a hurricane off the Bahamas. The high waves smashed two of her lifeboats and swept them overboard. The vessel sprang a leak, the pumps were broken, and water was flowing in. Captain Jørgensen then decided to pull into Hampton Roads for repair.
The weather had made it impossible to ascertain the position for several days, and suddenly, when approaching the coast, the bark hit a sandbar about 350 yards from the Virginia Beach shore. This was in the morning of Good Friday, March 27. 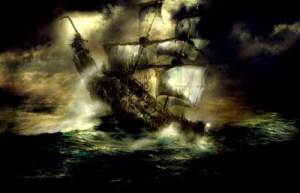 Two local U.S. Life Saving Stations (forerunner of the U.S. Coast Guard) had received message of a ship in distress, and the crews tried to shoot a line out to the Dictator. The strong wind prevented it from reaching the bark. An empty water barrel with a line attached was dropped from the ship. The barrel drifted ashore, and a breeches buoy could be hauled to the bark. However, the Dictator rolled so badly that attempts with the breeches buoy had to be abandoned.
On board, the crew hoped for a lifeboat to be sent out, but the heavy storm made this impossible. Captain Jørgensen then decided to send four of his men in the only remaining boat, a small dinghy. Through skillful seamanship they reached the shore. New attempts were made with the breeches buoy, now with success, and in this way several of the crewmen were rescued.
It was getting dark and the Dictator was now being broken down by the waves. As a last rescuing experiment, a “raft” was made from the accommodation ladder. Mrs. Jørgensen had one of the ship’s two ring shaped-shaped life preservers. Captain Jørgensen put the other on himself, lashing his little son to his breast in the life preserver. The captain was helping his wife down the raft, when it capsized in the high waves and Captain Jørgensen was thrown away from the ship. He was pulled downwards and when he surfaced, his son was lost. In the breakers, he lost consciousness but was washed ashore and found alive.
Mrs. Jørgensen and the crewmen remaining on the wreck were swept overboard by the huge waves as the ship was breaking apart.
Nine of the crewmen were rescued, in addition to Captain Jørgensen. Mrs. Jørgensen, her son Carl, and five of the crew perished. The bodies were buried in Norfolk on March 31.

The day after the shipwreck the magnificent figurehead of the Dictator was found among the wreckage. It was placed on the oceanfront, facing the sea, as a memorial to the shipwreck and those who perished.
The figurehead became a well known and beloved landmark in Virginia Beach. It stood for 62 years, until 1953 when it was destroyed by the hurricane Barbara, which caused heavy damage in Virginia. 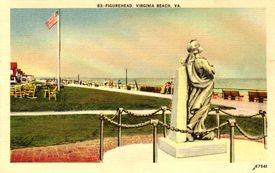 The people of Virginia Beach did not forget their Norwegian Lady, and after some time the possibility of a replacement of the figurehead was discussed. Erik Bye, well known from popular seamen’s programs in the Norwegian Broadcasting Corporation, took interest in the story. In cooperation with Emil Andersen, Mayor of Moss, the necessary money was raised from shipping and industrial companies in Moss for a memorial at Virginia Beach, a figurehead in bronze. The Norwegian sculptor Ørnulf Bast was commissioned for the work.

“The Jubilee Fund of 1920 for the Beautifying of Moss City” and “The Society for the Welfare of the City of Moss” donated a duplicate of the sculpture to the city of Moss, and on September 22, 1962, the unveiling could take place in Virginia Beach and in Moss simultaneously.
In April 1991, the Lady in Moss, Norway was removed from its original place by the Town Hall Bridge to the park by the Canal, where she now stands facing the sea and greeting her sister in Virginia Beach, Virginia. 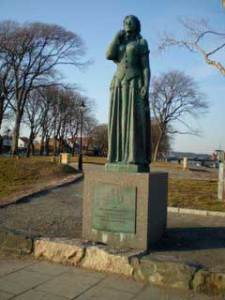 The Norwegian Lady statue became a solid bond between Virginia Beach and Moss.

Every year since 1962, at the time of the anniversary of the shipwreck Dictator a memorial service takes place at the Norwegian Lady in Virginia Beach, and flowers are placed by the statue.
In 1974, the Virginia Beach City Council adopted a resolution officially extending an invitation to Moss to become a sister city for the purpose of creating greater mutual understanding between the people of Moss and Virginia Beach. The Council of Aldermen of the city of Moss unanimously accepted the invitation.
Numerous official and unofficial visits have taken place between the two cities over the years, and have further strengthened the ties between the sister cities.

VIRGINIA BEACH is located on the south-eastern tip of the state of Virginia, USA. The city is bounded on the east side by the Atlantic Ocean, on the north by the Chesapeake Bay, while the South border is the state of North Carolina.
In the late 19th century, Virginia Beach  was discovered as a resort area. It became an incorporated town in 1906. After merging with Princess Anne County in 1963, the city expanded to over 310 square miles.
Virginia Beach has a population of approx. 438,000 (2010) and is the most populous city in the state of Virginia.

MOSS is situated on the eastern shores of the Oslofjord, 40 miles south of Oslo, Norway. The population is 35,000 (2010), the area 25 square miles.
Moss became a town in 1720, but had been an important place for sawmills, lumber export, and shipping from the 16th century.
The town has a variety of important industries and is a regional center for shopping and education. Moss is famous for its art galleries and for its many sculptures.

Today The Norwegian Lady Statue stands in front of a group of statues that are part of the new Naval Aviation Monument Park at Virginia Beach’s Oceanfront. Photo:Banu Gürsaler Syvertsen